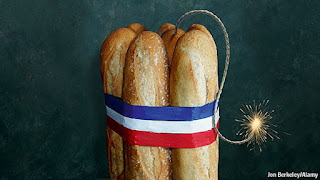 
France: Challenges ahead for sure, but no time-bomb!
Important UK publications, including the FT and The Economist, appear to have changed their outlook on the eurozone in recent months to now expect it to survive – which is welcome news. But after having noticed the clearer message out of Berlin with respect to the German commitment to Europe, and Greece in particular, some of them now seem to have found a new “Pruegelknabe”, namely France.

I don’t usually want to use this note to comment on other people's writing, but the latest issue of The Economist is just too much to take on a Saturday night with a wonderful glass of St Emilion by my side: The front page of this week's Economist announces “The time-bomb at the heart of Europe” above a baguette-wired bomb wrapped in the Tricolour, and inside you’ll find a borderline emotional 14-page special on France, suggesting that France will be the next "crisis country", possibly falling off the cliff next year. I’ll be the first to agree that France faces a number of important challenges, particularly when it comes to adjusting to the new globalised world. Its global competitiveness is not good enough. But that’s far from unique among OECD countries, and calling it a time-bomb is – frankly – silly. The desire among some here in London of aiming at anything slightly out of balance on the Continent, blow it out of proportion, while forgetting to look in the mirror never fails to surprise me.

We economists can always find issues to improve in any economy, so to me, comparisons are so much more interesting. Hence, this past week I updated a piece I did a year ago comparing Italy and the UK. A year ago I concluded that the two economies really are rather similar in terms of balance sheets etc, but I now found that the fundamental changes to adjust towards an economy that can compete in the new globalised world have progressed more in Italy than in the UK. Indeed, in some respect, the UK has moved backwards. (As you might guess, I received a good amount of responses to that note!)

I am not going to do a similar comparison between France and the UK this evening (the St Emilion next to me could make me biased!), but let me give you just two examples where The Economist's France bashing gets off trail: First, after (appropriately) worrying about the increasing public debt and high unemployment, The Economist leader concludes: “The external current account deficit (of France) has swung … into one of the eurozone’s biggest deficits. In short, too many of France’s firms are uncompetitive”. One would be forgiven for concluding that we have identified a major problem here - but if you bother to turn to page 96 of that same issue of The Economist, you’ll see that the latest 12-months French current account deficit was 2.1% of estimated 2012 GDP!

I'll make three quick comments: (1) yes, the French current account deficit is indeed “one of the eurozone’s biggest deficits”, but that primarily reflects the fact that the eurozone crisis countries have adjusted amazing well; (2) the authors fail to explain when a 2.1% of GDP deficit became a major issue; and (3) if they indeed feel that a 2.1% of GDP deficit is a major issue, what should the reader then think about the 3.2% of GDP deficit for the UK and the 3.1% deficits in the US and Canada? – all in the same table on page 96 of the Economist!

A second – and more emotional – example is the attack on Hollande: “Why should business believe (President Hollande) when he has already pushed through a string of leftist measures, including a 75% top income tax rate … No wonder so many would-be entrepreneurs are talking of leaving the country.” Believe me, I am no fan of a 75% marginal tax rate, and there are many other parts of French policymaking I disagree with, but maybe it would have been fair to mention that the 75% marginal rate is temporary and that it kicks in at one million euros. (I wonder how many "would-be entrepreneurs" anywhere outside Silicon Valley are planning on netting more than a million euros per year in personal income in the foreseeable future.) And maybe one could have reflected on the comparison with the temporary 50% extra bonus tax for one specific sector implemented by the UK conservative government when they came to power? Coming on top of the existing 50% marginal tax rate, that extra 50% bonus tax raised the marginal tax rate for UK taxpayers in the financial sector to … 75%, although in the UK the 75% margin did not kick in at one million euros, but in some circumstances at as low as at £150,000!

To be sure, I am not in the business of arguing that France does not have challenges – just that it is not more of a time-bomb than so many other countries. Indeed, for a balanced (if brief) discussion of Hollande, France and Europe, see the BBC's Stephanie Flanders' latest blog. And for a great discussion of the UK's challenges, see my former boss at Goldman, Gavyn Davies' piece in today's FT. Gavyn Davies argues that only about half of the UK underperformance relative to the US was due to the fiscal tightening – the rest “is down to the abject performance of UK exports, stemming mainly from the UK’s very low penetration of the rapidly expanding emerging markets." Incidentally, UK exports have underperformed that of Italy (and France) again this past year, as I discussed in my Italy vs the UK note earlier this past week.